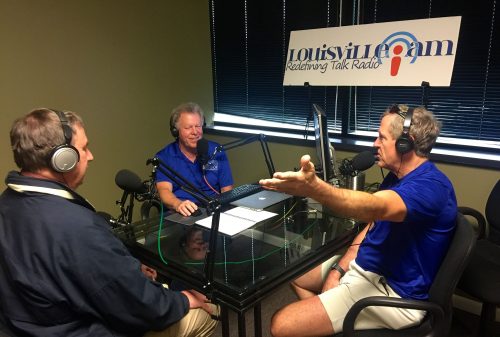 If you’ve been near a radio in this town in the last three decades, you know the voice of Joe Elliott, beloved talk show host at WHAS-84. These days Elliott is the regular fill-in for three WHAS radio hosts, which keeps him pretty busy. We talk about how he overcame blindness to fulfill his childhood dream of being on the radio. And we toss around some opinions on the upcoming primary election in Kentucky.

Last fall, after 22 years as an anchor at WAVE-TV, the station let Scott Reynolds know his contract wouldn’t be renewed. In our interview you’ll hear how he’s handled not working, and the story of how he’s taking over a new newscast at WDRB in September. And Scott tells me how he almost ended up a dairy farmer.

In a departure from the usual Rusty Satellite format, both Scott and Joe join me in the studio for a discussion on the state of local media and how we got here.

Thanks to Passport Health Plan, Heuser Health, the Eye Care Institute and Focus Physical Therapy for making the 30-6th episode of the Rusty Satellite Show possible.