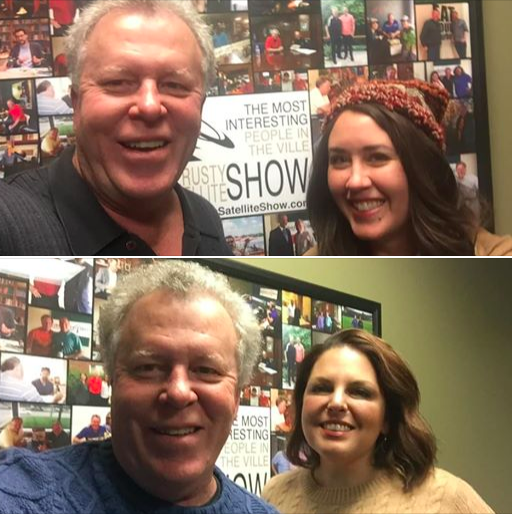 It’s been an amazing week for the city’s longest-running and most interesting podcast, so let me tell you about it.

For episode #341, I interviewed two very passionate women who are at the top of their respective professions. First up is Liz Richter, whose murals you can find all over town. My favorite is in Hikes Point, but you’ll hear about others and about scaffolding and technique and how one becomes a mural artist. And she’s delightful.

Jessie Richardson is glad to be in Kentucky, where she can oversee operations at Evermore Farm in Oldham County, where students learn to ride horses the right way. Some even make it to the top in national competitions, as Jessie has done. You’ll hear about Jessie’s travels around the country, and her unique operation in Shelbyville.

On Wednesday, it was the debut of 2020’s Breakfast of Champions series, and I took a lot away from what Vince Tyra had to say about professionalism and ethics in athletics. In the news, five well-known personalities — Paul Rogers, Leland Conway, John Ramsey, Mike Rutherford and Amy Nic, were unceremoniously fired from their jobs with heartless IHeart Media. The lesson — media doesn’t pay.

The state legislature is moving a sports gambling bill forward, but no one who follows the legislature expects it to pass, even as Indiana collected some $400 million in sports bets in December. And since it’s Oscar season, I’ll tell you what I thought of the movie 1917. I also visited Kore Gallery in Shelby Park, where Bill Brymer’s Artists:Inspired series of portraits is on display.

Not a bad week for a guy moving around on a scooter, huh? The podcast is brought to you from the REMAX Properties East studio by my friends at the Eye Care Institute and Heuser Health.