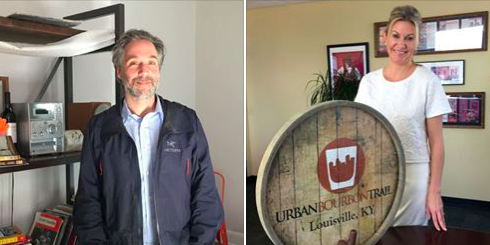 The first Bourbon City guest of the week on the Rusty Satellite Show is Stacey Yates, the excellent communications VP of the Louisville Convention and Visitors Bureau. I talked with Stacey just after she got her first look at the newly-completed Omni Hotel, and she was raving about it. Plus, we preview some of the ideas coming up in future Bourbon City guest spots. Stacey’s last appearance here was in 2014.

You can’t help but like the ideas Scott Koloms has brought to the table at his Portland-based business, Facilities Management Services. Listen in and find out how Scott has grown the firm from 30 to 800 employees, using a unique mission-based approach focused on employees and community. He’s also speaking at Tuesday’s Breakfast of Champions, so if you want to meet Scott, join us then at the University Club.

As of Wednesday, at least, the Louisville Cardinal basketball team is still alive in the ACC Tournament, with a rematch with top-ranked Virginia set for Thursday. There’s a ferris wheel coming to Waterfront Park, which you will be able to ride for $14. And the Challenger Lifts building is coming down, another step toward the construction of a soccer stadium for Louisville City FC.

The Rusty Satellite media operation, which includes LouisvilleKY.com, The Pulse of the City, plans to grow its reach by joining the Twitter universe, so I encourage you to follow @RickyRedding, @EatDrinkTalkLou, and @RustySatellite to keep up with all we’re doing. And watch for the re-launch of the EatDrinkTalk podcast, with co-host Carolyn McLean, coming up next month.

Thanks for listening, and thanks to the Louisville Convention and Visitors Bureau, Heuser Health and Passport Health Plan for sponsoring the show.