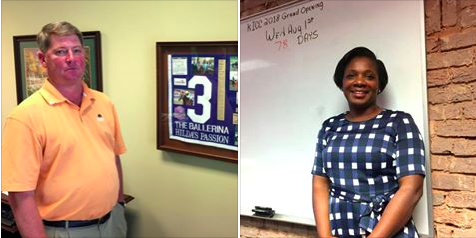 If Justify wins the Preakness, the payoff to bettors will be small. But for Clinton Glasscock and the Starlight Racing ownership group, it will be on to the Belmont for the ride of a lifetime. Glasscock, who is in the insurance business, tells me about the group’s purchase of both Justify and Audible this year, and how big of a thrill it was to see Justify win the Run for the Roses.

Our Bourbon City Guest of the Week is Stacey Church, who has the big task of running the new Kentucky International Convention Center. The UK grad, an accounting major, found her niche in facility management and jumped at the chance to return to the Bluegrass State earlier this year. Now she’s counting down the days until the early August grand re-opening of the $200 million center.

In the news, it’s Primary Election day Tuesday, and the race for County Attorney heated up a bit this week. Our Rusty Satellite guest Brent Ackerson told me a few weeks back about his candidacy against incumbent Mike O’Connell. Now, O’Connell is the target of a lawsuit from Chris Thieneman, who has been campaigning against him.  I’ve got the details.

The U.S. Supreme Court sent down a ruling that allows states to establish sports betting operations, but don’t expect anything to happen in Kentucky, where the Governor would rather take away teacher pensions than entertain new revenue ideas that involve gambling or marijuana.

Looking ahead, this weekend there’s a Food Truck and Craft Beer event at the Waterfront, and the annual Buy Local Fair at the Water Tower. Hear all about it on this episode of the Rusty Satellite Show, sponsored by Passport Health Plan, Heuser Health and the Convention and Visitors Bureau.