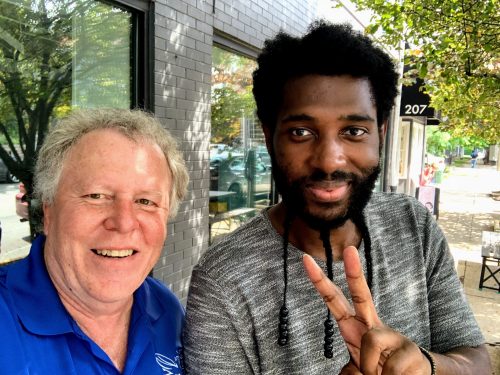 The 2020 Democratic Primary turned out to have one of the largest turnouts in history, and though it wasn’t enough to equal a win for Charles Booker, the voters in District 4 of the Metro Council elected its youngest-ever member. Four years ago I did a Rusty Satellite interview with a young music instructor at Hite Elementary. Today, he is basking in the joy of defeating five opponents in the primary.

You’ll hear about Jecorey’s plans — and his most immediate plan, participating in a show at Paristown on Saturday. However, the Booker campaign came up a few thousand votes short, but we haven’t heard the last from Mr. Booker. And I’m wondering how urban Democrats who boosted Booker will treat Amy McGrath when she campaigns here. In other election news, our friend Dan Borsch was unable to win the District 8 seat in the Highlands. The race to face John Yarmuth in November was decided by 130 votes, and another Metro Council member, David Yates, won his race to go to the State Senate.

My second guest is Chris Thompson, the fitness director at Heuser Health, who has some great advice on ridding yourself of that “Quarantine 15”. Exercise classes are back in session at Heuser’s Mellwood and East End locations, and Chris shares some of the secrets to maintaining your own fitness.

This was the week we learned that there will be no baseball in the ‘Ville at Slugger Field this year, and that the St. James Court Art Fair will not take place. But business is coming back at restaurants and they plan to open the new soccer stadium next week. And in real estate, there is plenty of optimism that the market is set to rebound after a few months of poor sales.

Thanks as always to the Eye Care Institute, Heuser Health and eXp Realty for sponsoring the show. Give me a call at 502-439-6391 to suggest a guest or offer feedback.