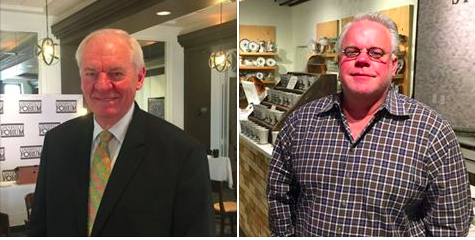 With spring comes optimism, and this episode is all about the good things that are on the way right here in Louisville. First up, I got to speak with a true basketball legend, Dan Issel, who has returned to Louisville for the first time since leading the ABA’s Colonels to the 1975 ABA title. Issel leads a group that is putting the pieces in place to make a run at an NBA expansion team.

Next up is Steve Smith, the dynamic owner of Louisville Stoneware, who is heading up the Paristown Pointe project near East Broadway. The plans include a performance venue that will be operated by the Kentucky Center for the Arts, and some new restaurants. Smith is the Bourbon City Guest of the Week.

More positive news come from Gill Holland, who spoke at the Breakfast of Champions event Monday, breaking some news about what’s coming to Portland, including a major move by the University of Louisville. And I ventured to 40th and River Park to visit with Rolando Minter, who is three decades into operating a barber shop that attracts customers from all over town.

The dark cloud of all this is our Governor, whose latest salvo was to call a respected judge in Frankfort “an incompetent hack”, to go with his other undignified insults of the media and teachers. As if to prove the popularity of boorish behavior, Hoosier GOP voters selected one of three U.S. Senate hopefuls in a primary election in which each tried to prove they were the most like Trump.

We’re not going to let political news deter our optimism, however, in this upbeat episode of the Rusty Satellite Show, brought to you by Passport Health Plan, the Louisville Convention and Visitors Bureau and Heuser Health.