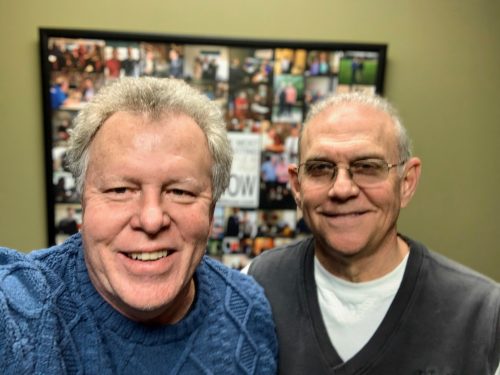 Welcome to the 342nd episode of the city’s longest-running and most interesting podcast — this is a good one.

When Paul Rogers picked up his phone while in Pittsburgh preparing to do play-by-play of a basketball game, he had no idea it would change the course of his daily life. The call from his boss at i Heart Radio, and was to inform him that after 47 years, his services were no longer needed at WHAS84.  That’s where Rogers had his main gig, talking about sports during the station’s once-popular morning show. It was a heartless corporate way to do it, but a week later Rogers is getting used to a life in which he doesn’t have to get to work at 4 a.m.

Of course, he’s still the voice of the Cards and is in the midst of an exciting basketball season. We talk about what’s next for him and the demise of local radio, and I ask him who he thinks will be the last local radio personality.

I’ve been over to the Jewish Community Center many times, but had never met Frank Goodloe, a giant of a man who runs CenterStage and is preparing for the organization’s annual talent show, Louisville’s Got Talent. Goodloe, from Henry County, set his sights on an artistic career early on. He’s featured in Bill Brymer’s portrait exhibit, Artists:Inspired, at the Kore Gallery.

Back at the REMAX Properties East studio, I welcome a special guest — my son Nick, who is home from Europe for a month or so. I’m thrilled we’re spending some time together, including a trip to Actors Theatre last week. In local news, there’s the just-announced move of BarVettis to NuLu, and unfortunately the Lucky’s grocery on Hurstbourne is shutting down. In local real estate it’s a sellers market and things are heating up. Call me at 502-439-6391 to talk about what’s out there.

As always thanks to the Eye Care Institute, Heuser Health and REMAX Properties East for making this excellent podcast possible.