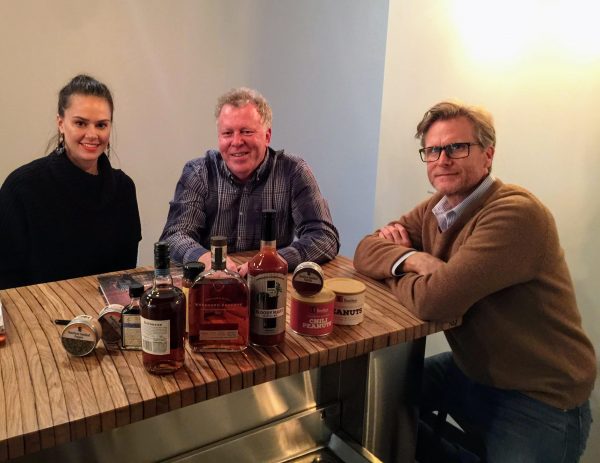 The Rusty Satellite Show’s consecutive episodes streak, now numbering 332, is not deterred by the host’s various travels. This week, after spending five glorious days in Colorado, your intrepid interviewer returned to learn about a wonderful loan program for immigrants and West End residents, and to visit the almost-open Eat Your Bourbon Marketplace on Frankfort Avenue.

Matt Jamie says he’s doing all this for the first time — developing a line of bourbon-related food products, promoting a retail store…and now opening a marketplace next door to his retail outlet on Frankfort Avenue, where you can get a drink, sample creations from his cookbook, and purchase items from his expanded line of products. His energetic marketing assistant, Emily Kanisasty, joins in the fun over some Bourbon Smoked Chili Peanuts.

Jamie has even hired a locally-famous chef, Michael Crouch, to keep a continuous line of scrumptious goodies (all made with Eat Your Bourbon ingredients) ready for sampling. The grand opening is Nov. 22, and the first 20 to show up get a free cocktail.

I met Amy Shir a year ago at her office on Berry Boulevard. With the success of her LHOME project, it was time to have her on the show. Shir’s has provided 68 loans since it began two years ago, and all but one have kept to the payback schedule. That’s quite a record considering recipients are mostly people who are turned down by banks — immigrants and people of color from West Louisville. Shir’s program is helping residents pay their property tax, fix up their homes and get the proper credentials for starting a business.

On Tuesday, the #1 basketball team in the country, the Kentucky Wildcats, lost to the Purple Aces of Evansville, so I wondered if John Calipari might take a page from Gov. Matt Bevin’s book and claim “irregularities” during the game and refuse to concede. I’m also wondering how Bevin is taking the news that Indiana just boasted of a $92 million month, a 160 percent increase, on money waged through sports betting.  Bevin called that fool’s gold, but I’d sure like to have some of it for Kentucky.

The city’s most interesting and longest-running podcast originates from the REMAX Properties East Studio on Timberwood Circle, which reminds you that it’s always a good time to buy a new home. Call Rick at 502-439-6391 to talk real estate.

The show is also thankful for the generous support it receives from the Eye Care Institute and Heuser Health.