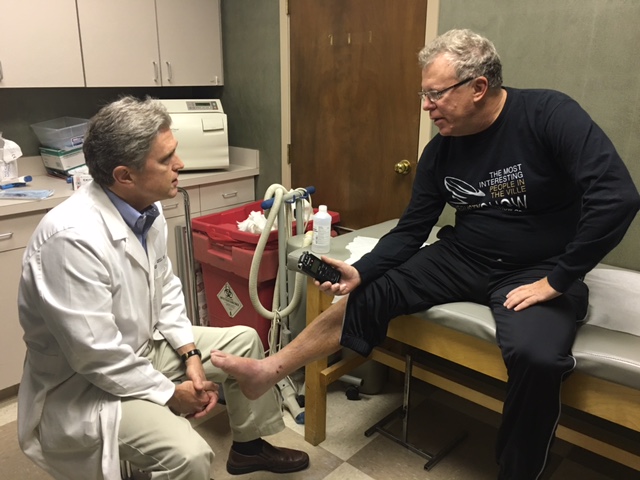 I now have an answer for the most unusual setting for a Rusty Satellite interview — I talked with Dr. George Quill as he examined my ankle during a follow-up visit this week. It turns out Dr. Quill donates time to some great causes — providing services for recovering addicts at The Healing Place and doing mission trips to Guatemala. Listen in for a great story.

As your thoughts turn to sunshine, it’s nice to think about traveling. Louisville is the home to Boomer Travel Patrol, the brainchild of public relations exec Liz Dahl. Hear about all the cool aspects of travel focused on people like me — baby boomers. Liz also talks about her former life in politics as the chief of staff for First Lady Phyllis George Brown from 1979-83.

While I’m spending most of my time on the couch, there’s plenty going on around town — including this week’s opportunity to walk across the new, and newly-named, Abraham Lincoln Bridge. Plus, lots of former Rusty Satellite guests news from Paul Tuell, Joe Steier, Teddy Abrams, Tom Mabe and Katie George. I summarize the football state of things and tell you about my trip to WKU, all on this 126th episode of the Rusty Satellite Show.