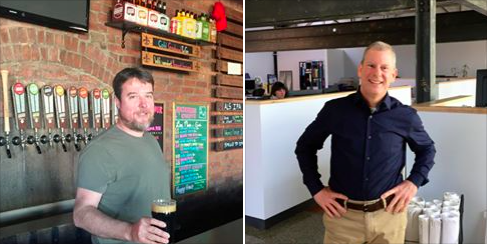 Things are really kicking into gear around here, and we’ve got the good parts covered here on the Rusty Satellite Show. Guest co-host Cyndy Tandy and I chat about Saturday’s St. Patrick’s Parade, the blessing of the keg and of course, the start of the basketball post-season. Cyndy’s not so sure about her beloved Wildcats this year, but shares the story of having a birthday right in the middle of March Madness. We also have a more serious discussion of HB151, a bill in the Kentucky legislature that would change the way JCPS students are assigned schools.

My first interview is with Joel Halblieb, the brewmaster and COO at Goodwood Brewing. It took place over a new Gouza brew at the Tap Room at Clay and Main, where all around there seems to be new construction going on. Halblieb is gearing up for a big week — with the blessing of the keg by the Royal Hibernians on Thursday, and the craziness that is St. Patrick’s Week for any establishment serving alcohol. Goodwood is now distributed in 15 states, all made with wood in some way at the massive plant just north of NuLu.

Scott Kremer didn’t have to move his architectural firm to Shelby Park downtown, but when he found an old car dealership that fit the growing firm’s needs, he quickly put the deal together. While there are still some finishing touches needed, his dozen employees are moved in and enjoying the new digs. Kremer said that while much of the company’s work is done for out-of-town clients, he believes it is important to have an inner-city presence. Plus, he’s learned some great history about the car dealer operation that once inhabited the space.

Enjoy this Rusty Satellite Show, brought to you by the Eye Care Institute and Passport Health Plans, and please tell your friends where you heard the most interesting people in the ‘Ville.