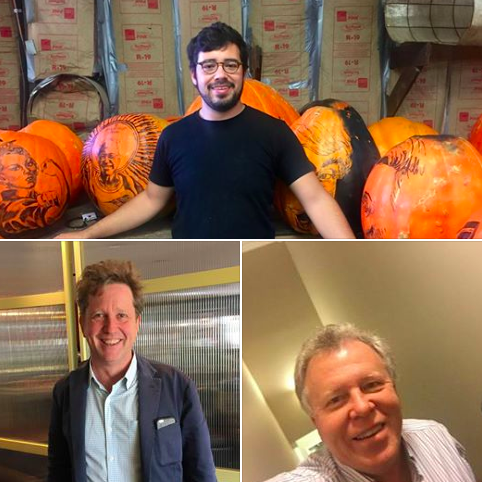 Rusty welcomes guest co-host Chris Anger, a true improvisor, to play in the new segment “What’s Up with That?” and tell our audience all about his relationship with our first guest, Gill Holland.

Holland, who was a guest on Show #11 back in 2013, is back to talk about the experience he’s having knocking on doors in Prospect as a candidate for the Metro Council’s District 16. A Democrat in a Republican-dominated district, Gill believes his gentler, kinder political approach will pave his path to victory Nov. 8. Of course, he’s already earned the title “Mayor of NuLu” and was voted Louisville magazine’s Person of the Year. Listen in as he explains his vision for being an effective member of the Council.

Monday is Halloween, so I went to my old haunt, Iroquois Park, to with Edward Cabral, one of the world’s few professional pumpkin carvers. The Indiana native and Chicago resident is spending five weeks here creating and replacing thousands of pumpkins on Iroquois Park’s Jack O Lantern Spectacular trail. Find out about Cabral’s artistic career, plus details about the event that may draw 100,000 people to Iroquois Park.