On Day One of the Biden Administration, we recorded two great interviews for the Rusty Satellite Show. First, I went to St. Matthews and Home Cuisine’s kitchen for a chat with Mae Pike about the KETO diet, staying healthy and how much better we were doing mentally as the political winds shifted to a more pleasant direction.

You’ll be hearing about Home Cuisine’s meal delivery service and my progress on my health quest, as I’ve partnered with Mae to promote her business and sample her products. I’m having my first KETO meal this week.

Next it was on to Portland. Since I was last here, Danny Seim has taken over management of the Portland Museum and it’s obvious he’s getting things done here. We met Danny in 2017 at the Dolfinger Building, a successful project that now houses several non-profit organizations. Danny tells me the story of how he just decided to start painting the rotting house next door to the Museum, and how it now becoming a big part of the Museum’s future.

In the news, well, Joe Biden. But this is a local show, and I tell you about a few amazing stories from the world of sports — the Buffalo BillsMafia’s extraordinary efforts to raise funds for Lamar Jackson’s favorite charity, Blessings in a Backpack. There’s the ascension of the U of L women’s basketball team to #1 in the U.S., and the new track and field facility in the West End announced its first event will be in February. What’s more, the pesky Hurstbourne neighbors fighting a new TopGolf facility at Oxmoor have given up that legal battle and gone back inside their homes.

It’s all right here on the Rusty Satellite Show, the longest-running and most interesting podcast in the ‘Ville. The show welcomes a new sponsor this week in Home Cuisine, and is sponsored by eXp Realty. 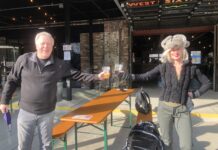 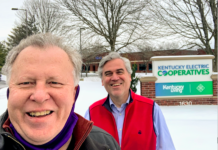 Joe Arnold is your Go-To for Power, and the Power of Love Yascone’s Social Connections