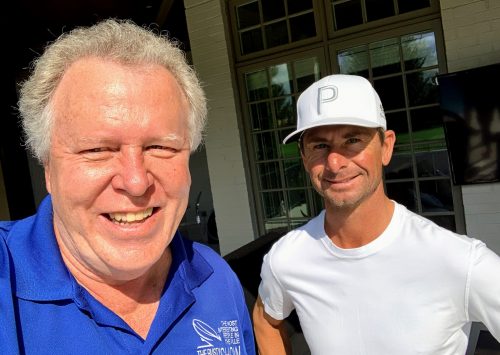 On my last day in my 50s, I present to you the 364th episode of the Rusty Satellite Show, the most interesting podcast in the ‘Ville. That’s right, I slide into my 60s on Friday, a milestone of sorts.

To celebrate, I’ve got a couple of outstanding locals you probably know — Corey Lanerie will be the jockey aboard Shirl’s Speight, a likely longshot but the only undefeated horse entering the race. Corey moved to the ‘Ville in 2005 and has since captured 19 riding titles at Churchill. I visited his beautiful home in Lake Forest for the interview.

First up is Lachlan McLean, a familiar name to those who follow sports talk radio. A few weeks ago, he gave that up to focus full-time on his work as a Spectrum News anchor, so you’ll hear about why he did that and what the Spectrum operation is all about. And we had to recognize his wife Carolyn, a friend of the show, who was successful in her first appearance at the World Championship Horse Show this week. Lach talked with me in the eXp Realty office on N. English Station Road.

It’s been a nice stretch of socializing for me, as I explain in the show, but I’m miffed about all the ways the world is trying to scare us, and about the way many of you fall for the fear-mongering. From the weather to protests to politics, I’m noticing that making you scared has become the most common tactic for motivating you. And this week, after planning for virtual learning for months, JCPS had many of its virtual classrooms invaded by unwanted visitors, causing them to re-set things for next week.

The show comes to you thanks to the Eye Care Institute, Heuser Health and eXp Realty, with a reminder that you can call me, Rick Redding, at 502-439-6391, to talk about buying or selling real estate. I’ll be back with you next week as a 60-something.