Finally, there’s real snow out there. And for Joe Arnold, the former WHAS-TV reporter turned VP of the Kentucky Association of Electrical Cooperatives, that means fielding calls from media about power disruptions.  This week, he’s been doing some live TV for stations, primarily in Lexington, regarding the effect of the recent ice storm on power.

Joe obviously loves his work, and reveals in the interview a lot of interesting facts I didn’t know about the distribution of power, and we dive into what’s happened in Texas as well. He was surprised to learn that as a college student home for the summer of 1980, I worked at KAEC’s plant on Bishop Lane painting electrical transformers.

Love Yascone, along with her sisters Faith and Joy, have carved out a niche in social circles for hosting parties and mixing with celebrities. But the pandemic has dealt a real blow to those in the event business. Love tells me that the family’s Frankfort Avenue Coach House has been used lately as a gathering place for grieving families in lieu of funerals. But she’s staying busy developing a new “wearable art” clothing line inspired by her favorite are pieces.

There’s news this week — the closing of Another Place sandwich shop after 50 yearrs, the purchase of Uptown Cafe by longtime customer Tom Drexler and his wife, the Green District expanding to the Highlands and the re-opening of a prominent shopping strip on Breckenridge Lane. The new track and field facility opened its first event in the West End, and Ali Center exec Donald Lassere resigned. And there’s the snow, never as heavy as predicted, but enough to change our lives for the short-term. There’s also been plenty of reaction to Marc Murphy’s cartoon about Rush Limbaugh’s death.

Thanks also to Home Cuisine, our sponsor, and check out the SNOW DAY special.

It’s Back to Origin Park with Scott Martin; Luke Gamble and the Fund for the Sports 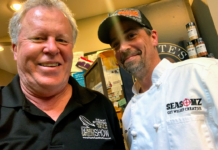 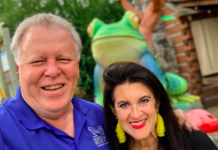 Spudz-Man John Good Loves America, Horses and Crisps; A Trip to the Zoo with Kyle Shepherd