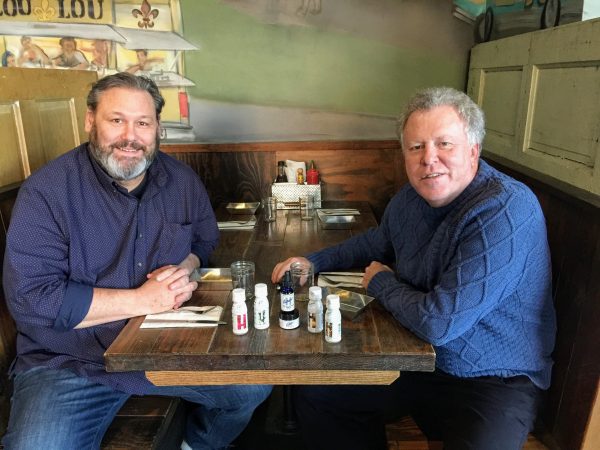 Ho Ho Ho! The Rusty Satellite Show is feeling extra jolly this season, bringing you more of the most interesting people in the ‘Ville. And throughout January, you’ll be hearing the interviews I’m recording this week with politicians, artists, actors and more as I recover from ankle surgery.

Of course you’re gonna love this show. What is it you think this town really needs? Did you say a karaoke bar? Zack Pennington, the extraordinary entrepreneur who brought you the city’s first axe-throwing venue, is planning a karaoke bar like no other.  So figure out your go-to karaoke song and head down to NoreABar — coming soon to NuLu. Zack has moved to Texas, sort of, but still spends plenty of time here.

We’ve accepted that Kentucky is in the race for last to approve any sort of marijuana legalization, but Jeff Stum is betting on CBD as the next big thing. He’s the man behind Hectare’s, a series of CBD products to give you energy, or help you relax. It’s made from Kentucky hemp, grown on a farm in southern Kentucky. You remember Jeff from his previous appearances here, promoting a Chai Tea (that didn’t make it) and Ballotin Chocolate Whiskey (which is thriving). I caught up with Jeff at Diamond’s Pub & Grub in St. Matthews, and recorded before a live audience of two.

Rusty alumni in the news include GLI boss Kent Oyler, who is stepping down there, and handing things over to Sarah Davasher-Wisdom, a wise pick. And Marc Murphy, Ricky L. Jones and Aaron Yarmuth were among those attending and speaking at an downtown rally called Impeach and Remove, one of hundreds of national events encouraging the removal of Trump.

I put consecutive show #337 together at the ReMax Properties East studio, where the Sokoler team was just named one of the top ReMax team in the nation. This podcast is sponsored by my friends at the Eye Care Institute and Heuser Health.