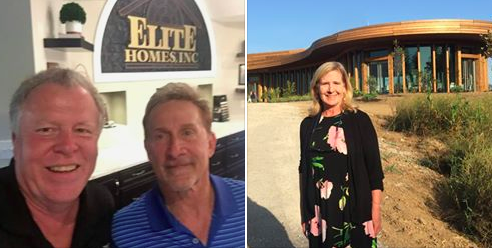 Louisville is getting something special this week – the grand opening of the Waterfront Botanical Gardens. Its sits above street-level on ground that once was a junkyard, but has been transformed into something the city can be proud of. And Kasey Maier is the dynamic leader who raised the $16 million (thus far) to make it happen. We talk about what’s happened in the three years since she was last on the show, and what visitors can look forward to.

Speaking of reunions, the last real conversation I had with Joe Pusateri was probably in 1992, when he was the president of the Home Builders Association and I worked there as Marketing Director. We collaborated on a TV show, Louisville’s Best New Homes, that enjoyed a 20-year run. Joe is one of the ‘Ville’s most accomplished citizens. He’s the leader of Elite Homes, which expects to build 150 homes this year, and has contributed mightily to many causes. You may know him from the 2008 Extreme Makeover TV show, which was the talk of the town in 2008. And yes, he was in the news when he helped save the Louisville Orchestra. Find out what is motivating him now in our interview.

Those three weeks of music festivals at the Fairgrounds seemed to go off without a hitch, and the massive crowds made it a big success. So I’m wondering what other types of Fests the gang at Danny Wimmer Presents might come up with. The city’s Director  of Public Health, Sarah Moyer, is warning citizens to stay away from vaping, a stupid habit that should be treated with the same disdain we have for smoking, and it turns out it can be just as deadly.

This weekend the football Cardinals are back to face Boston College, and are somehow favored. And it’s the return of the St. James Court Art Fair in Old Louisville, one of the city’s most anticipated events.

Want to know more about the city’s neighborhoods? Call me, Rick Redding (502-439-6391), and I’ll tell you about the housing market and help you find a new home. I record the show at the Re/Max Properties East studios on Timberwood Circle, and this week did the interview with Kasey Maier at the new Waterfront Botanical Gardens. I met Joe Pusateri at his impressive Elite Homes HQ on Shelbyville Road in Eastwood.

Thanks also to the Eye Care Institute in Butchertown, and to Heuser Health, for sponsoring the show.