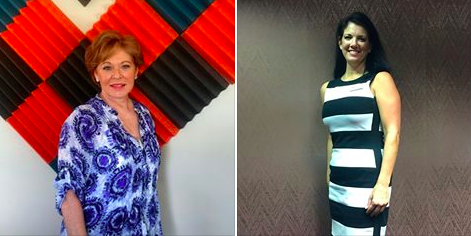 Rusty is surrounded by beauty, and brains, as he welcomes in ex-WHAS-TV anchor Melissa Swan and entrepreneur Stephanie Clements. Swan, four months after leaving the anchor chair, is excited about embarking on a new business career that includes public speaking and a new company. Swan will speak at the next Breakfast of Champions, Sept. 13, at the University Club.

Clements came to Louisville more than a decade ago from Alabama, but it wasn’t until 2013 that she had the idea to start a business focused on connecting consumers with contractors. Her Homeowner’s Resource Guide has become a must-have for area realtors and the place-to-be for residential service providers.

The big news among ex-Rusty guests — Theresa Reno-Weber has left city government to take over the Metro United Way, and tech specialist Ted Smith departs on the same day to become CEO of a health-focused technology firm. Then there’s Joey Wagner’s new gig, which means you’ll be seeing more of him inside Papa John’s Cardinal Stadium this fall. And on the last summer weekend without football — the places to be are the Red Bull Flugtag at Waterfront Park and the Seven Sense Festival on Preston. All that and more on the 164th episode of The Rusty Satellite Show.