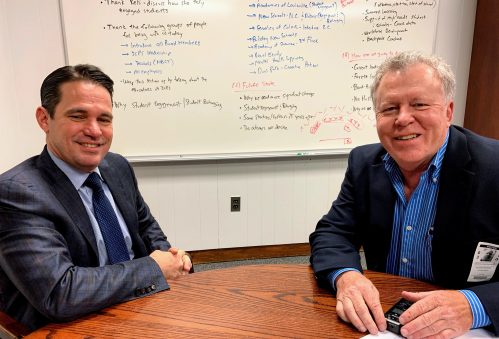 We’ve got some big hitters in the Rusty Satellite Show lineup, as I had the chance to visit the offices of Jefferson County Public Schools superintendent Marty Pollio and EdjSports chief Sean O’Leary.

Despite a less-than-routine week in which he was a constant in local media, talking about how JCPS is reacting to the coronavirus outbreak, Pollio was in good spirits and even aced my “What high school did this locally famous person go to?”  quiz. He’s also got some new priorities, such as changing the time of day that school starts, and finding a way to build new schools. His new media guy, Rusty Satellite Show guest #1, Mark Hebert, facilitated the interview.

I remember Gill Holland showing me around the brand new Green Building in NuLu many years ago. Now it’s occupied mostly by EdjAnalytics and the Galaxie bar and restaurant (I stopped in for an excellent taco). As O’Leary explained, EdjSports is doing some truly remarkable things with data — driving the decisions of NFL teams and more recently building a consumer platform for serious and casual gamblers. And he’s exploring the uses of data in other fields, piloting a program with JCPS and applying its expertise to the health care field.

Back at the REMAX Properties East studio, I’m wondering what part of the advice — Don’t Panic — officials are ignoring. Like the Governor (who advises you shouldn’t go to church), school officials (semester canceled at Berea, no classes at U of L), and YOU, for buying up all the toilet paper at Costco. Panic, defined as “sudden uncontrollable fear or anxiety, often causing wildly unthinking behavior,” has clearly taken over. Exactly one person in Jefferson County has been diagnosed with the virus, and he’s recovering.

It’s as if event planners and officials, so afraid of catching some measure of blame, are canceling schools based on a forecast of 2 inches of snow three weeks out. For now, all we can hope for is that the freaking out ends before Derby season gets in full swing.

The Rusty Satellite Show offers up some interesting conversation with the most interesting people in the ‘Ville, each and every week, as the longest-running podcast in the city. And we won’t let any old virus slow us down, though OK we’ll wash our hands more often.  Please, go out, do your thing, shake hands, hug, and don’t let the virus win. Brought to you by my friends at the Eye Care Institute, Heuser Health and REMAX Properties East.