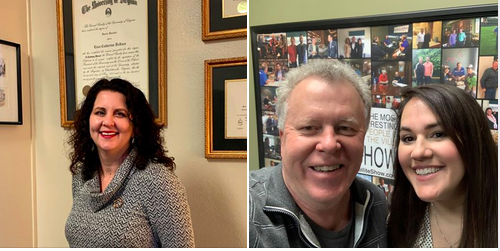 For Valentine’s Day, the Rusty Satellite Show presents two women who followed their passion, giving up comfortable careers to pursue what they consider to be more important work.

First, I welcome Kelsey Coots to the REMAX Properties East studio. After she helped lead the effort to mobilize teachers to defeat Matt Bevin in last year’s gubernatorial election, she was drawn to political activism. She had also mounted a campaign for statewide office as Auditor, in 2019. A few weeks ago she started a non-profit, People Over Politics, which is intended to help Kentuckians become more informed and active in statewide issues involving education, health care, wages and jobs.

Lisa DeJaco Crutcher was such a successful lawyer she was featured in newspaper articles. She specialized in trademark issues, and talks about her last case, which involved protecting the Ducks Unlimited brand, which she still carries on her keychain. But she said she was drawn to making a change that would make a difference in people’s lives, which is how she ended up as CEO of Catholic Charities. We talked in her office in an old school building on Fourth Street near Churchill Downs, a structure she’s busy trying to tear down once she hits her fund-raising goal. Listen in to hear of the important work at Catholic Charities.

Meanwhile, some bad actors were in the news. In John Schnatter ‘s lawsuit the P.R. company opposing him claims he was the architect of his own demise. And after less than a year in the job, the director of TARC abruptly resigned after WAVE News revealed six individuals were preparing to sue over sexual harassment charges.  An upscale restaurant ended its 20-year run, a growing chicken chain announced a new location, and a late-night pizza chain said it plans to open in the Baxter Center, the former home of Phoenix Hill Tavern.

The local real estate market is heating up, and with interest rates at historic lows, it’s a good time to give me a call about getting out of that expensive apartment to buy you own place. Call me at the Sokoler Team at REMAX Properties East — 502-439-6391.

The city’s most interesting and longest-running podcast is sponsored by my friends at the Eye Care Institute and Heuser Health.