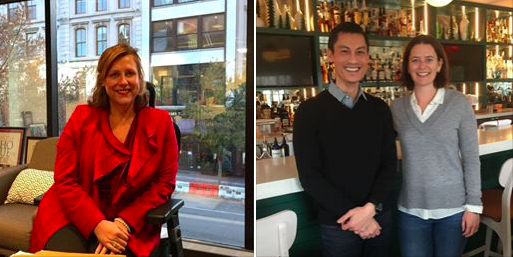 The city’s most interesting podcast begins with a trip down to the River — to the new Pine Room restaurant near Prospect. The original burned to the ground 40 years ago, but today’s version is the vision of Augusta Holland, who grew up nearby and wanted to re-create a nice place to eat. She’s teamed with well-known Louisville restaurateur Stephen Ton, whose hands-on management assures guests of an exquisite experience.

Kim Baker was in the first class of Governors’ Scholars in the Arts, which was just the start o fher
remarkable business career in the arts. Today she’s president and CEO of the Kentucky Center for the Arts, and has led the organization back from the devastating fire that occurred last June. Baker is also spearheading the development of a new performance venue at Paristown Pointe.

In other news, those who care about local sports remain on Brohm-Watch duty, checking social media every five minutes to see if Jeff Brohm has decided whether or not to coach the Cards. There are updates on Airbnb and TopGolf, two of my favorite 2018 stories. The state has finally saved up the money to tear down old Cardinal Stadium, which holds a ton of memories for a lot of us. And speaking of stadiums, there’s news about the proposed track and field facility in the West End.

On a sad note, Emily McCay passed away this week. Known around town as the Diaper Fairy, she fought a brave battle against luekemia. She was one of the most delightful guests ever to appear on this show. There’s a celebration of life planned for her Friday night at the Speed Museum.

Thanks to my sponsors — Passport Health Plan, Heuser Health and the Eye Care Institute, for making this podcast happen.