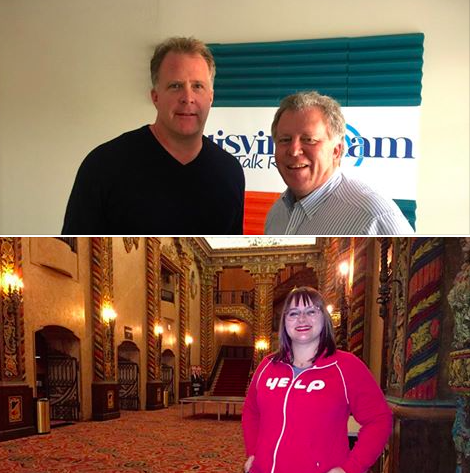 In the last show before the election, Rusty welcomes ex-politician and current activist Chris Thieneman as a special guest and co-host. Chris talks about his beef with local police and the ongoing legal battle he is conducting to clear his name, even after a court ruled him not guilty of assault. Chris says he thinks there are plenty of good cops, but that something needs to be done to get rid of the bad ones.

Later, we talk about U of L football, (he’s a former U of L All-American) and of course, the presidential election. We may disagree on that topic, but we manage to discuss our differences in a way that we can remain friends. And he’s got a surprise story for us about his thoughts on a local race and a conversation he had with the current Metro Council president, David Yates.

Emily Hagedorn has crossed over from journalism (she was a Courier-Journal reporter) to being the community manager for Yelp! She took the job three years ago and organizes dozens of events every year, the biggest of which occurs at the Louisville Palace Nov. 3. It’s called Art in Action, and feature dozens of food and drink vendors and some great entertainment. Plus, she fills me in on Yelp!’s policies on reviews.