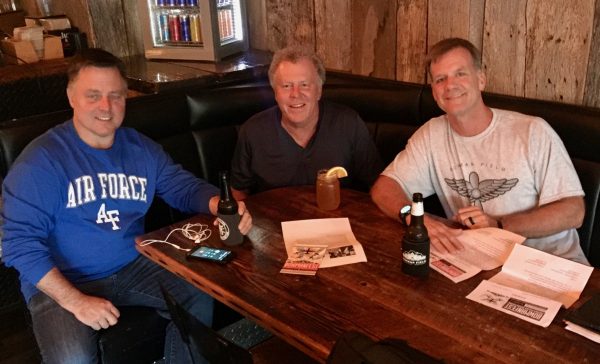 There’s this well-known joke about fighter pilots, but you’ll have to listen to the ‘Ville’s longest-running and most interesting podcast to hear it. I had a beer with Brigadier General Rob Givens, an Air Force pilot who has flown more than 100 combat missions, and Pat MacDonald, to talk about the upcoming Bowmanfest, a celebration of the 99 years that Bowman Field has been in operation. We met at Baxter’s on Bardstown Road for a fun and informative conversation.

Surely you remember Renee Murphy, right? The former WHAS-TV anchor has moved on from TV to one of the most challenging P.R. jobs in the city — spokesperson for Jefferson County Public Schools. On her one-year anniversary in the job, she says she’s enjoying it, though she does miss some aspects of television work – though not the part about being recognized all the time in public.

Back at the Re/Max Properties East studio, I take a look at an absurd story making headlines this week from Eastern High School, where I think some overzealous chaperones took out rulers to measure the distance between girls’ knees and hemlines , then sent several home because their skirts were too short. The school has vowed to re-examine its policy, but the damage is done. It’s been a big week for restaurants — with the closing of Butchertown Pizza Hall and Cafe Mimosa, while the Union 15 pizza shop in Colonial Gardens opened and it was announced that Royals will take over an old Moby Dick in J-town.

The neighbors who complained about the noise from Bourbon and Beyond last week at the Fairgrounds had better invest in ear plugs this week, because the high-decibel Louder Than Life concludes a successful three-week run over there. It’s a time of projects getting finished — the Waterfront Botanical Gardens is set to open next week, and what we can now call the yellow bridge is open with all four lanes operating downtown.

Thanks to my friends at Passport Health Plan, the Eye Care Institute and Heuser Health for sponsoring the show, and remember that you can call me, Rick Redding (502-439-6391), with the Sokolar Team at Re/Max Properties East, for help with buying or selling a home.