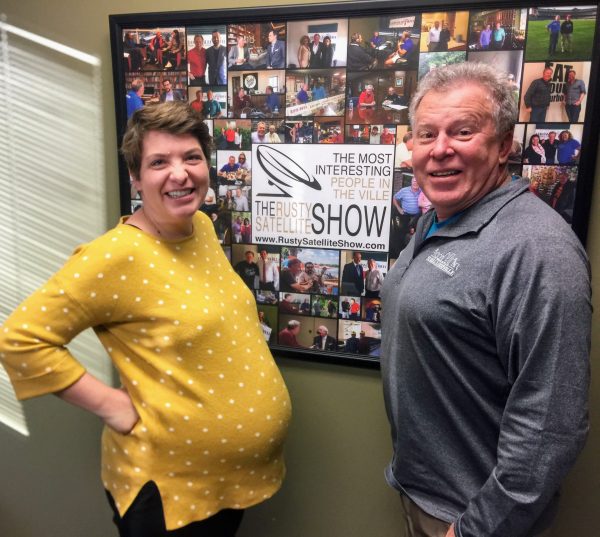 To borrow a phrase from the U.S. Post Office. . . Neither snow nor rain nor heat nor gloom of night nor ankle surgery stays this podcast from the weekly completion of its superior entertainment. Both of my guests came to the REMAX Properties East studio just before Christmas.

In this 339th episode of the ‘Ville’s mot interesting podcast, I welcome in an elected official and an entertainment entrepreneur to the REMAX Properties East studio. First up, Josie Raymond is my representative in the Kentucky House of Representatives. She’s just finishing her first year in the House, and I have plenty of questions for her about how that went. She’s also going to be one of the first legislators to give birth while in office.

In his second appearance on the show, showbiz entrepreneur Vin Morreale brought me a whole new book of short storie, Dark Wilderness, to read during my rehab. He’s got an acting school where he teaches anyone with the desire to become an actor. I imagine it being like The Kominsky Method, the Michael Douglas show on Netflix. Listen in as Vin and I talk about local acting opportunities. Learn more at AcademyArts.com, and go to one of Vin’s Tuesday night table reads.

A few events for the new year — On Jan. 15 it’s a special Breakfast of Champions, with U of L A.D. Vince Tyra.  That’s a Wednesday, and Vince will offer up an update on Cards’ athletics and share some of the things he’s learned about overcoming adversity. Also, ex-Rusty guest Charles Booker is likely announcing on Sunday that he’s running against Mitch McConnell for U.S. Senate. I’m all in for him.

2019 was a big year for the city, and I echo the Mayor’s sentiments in recognizing some of the major accomplishments that make Louisville a better place to live. If this is your year to buy a new home, please call me at 502-439-6391 and let me show you the path to home ownership. The Sokoler Team sells more homes than any other organization in the city.

The city’s longest-running and most interesting podcast is sponsored by my friends at the Eye Care Institute, Heuser Health and REMAX Properties East.