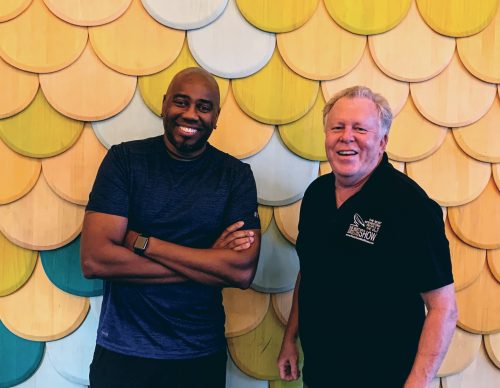 The Rusty Satellite Show set up shop this week at Noosh Nosh, one of my absolute favorite restaurants, with two of the most interesting people in the ‘Ville as guests.

First up, Ricky Jones may have his enemies, but the Atlanta native tells it like it is on his podcast, his Courier-Journal column and his Twitter feed. Back on the show for the first time in four years, Ricky tells me why he’s opposed to Amy McGrath in the U.S. Senate race, why Adolph Rupp’s name should come off the Lexington arena and the evolving issue of race.

Experts estimate that 20 percent of restaurants will not survive the pandemic. So it’s a bright spot when a non-profit like Apron Inc., which provides benefits to restaurant workers, comes up with an ingenious plan to help. Chef-in-a-Box has enlisted dozens of famed local chefs to provide a $50 box of goodies for 50 people. There’s one restaurant per week, starting with Volare and Chef Josh Moore. I spoke to one of the industry’s biggest supporters, Dan Dry, about the program and how we can get involved to help.

This week Gov. Andy Beshear caught more flak from the right after he shut down bars and further limited restaurant capacity, and suggested a 14-day quarantine if you’ve traveled to certain hot-spot states. But you won’t do that, just like some of you still refuse to mask up in public. Sports are starting — high schools will have fall sports, the ACC announced a 10 conference game plan for football, and the Louisville City FC is hosting games regularly downtown.

As always, thanks to the Eye Care Institute, Heuser Health and eXp Realty for sponsoring the most interesting podcast in the ‘Ville.