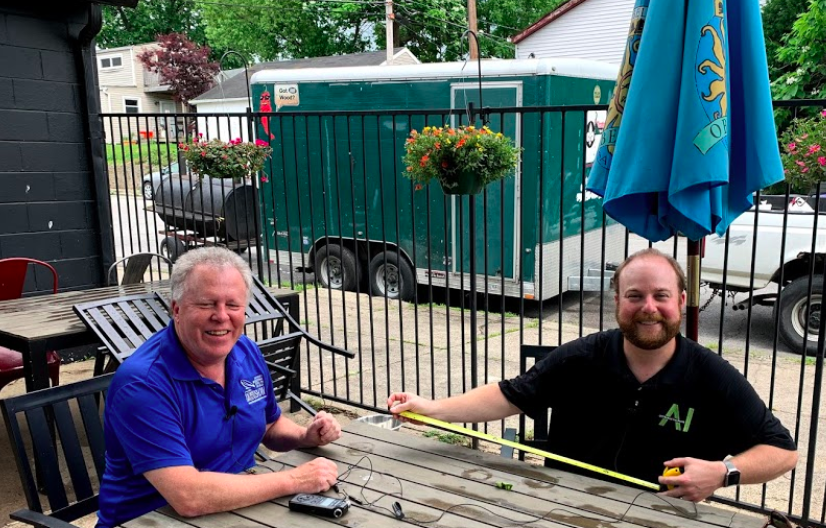 Did you miss me? I don’t know about you, but I’ve had enough talk of coronavirus, cancellations and quarantines. So welcome back to the city’s longest-running podcast, featuring the most interesting people in the ‘Ville. Back in the day, when the 349th consecutive weekly episode of the show was published on March 12, I asked JCPS Superintendent Marty Pollio if he thought he’d have to cancel any school days because of the virus. HA! Then, he said he’d wait to see what health officials advised.

So here we are, 11 weeks later, with everything changed, but also the same. My first guest is Michael Owens, an architect, who’s offering his services to restaurant owners on how to reconfigure their dining areas to keep social distancing in mind while expanding to sidewalks. We talked on the back patio at Four Pegs in Germantown.

One of the most interesting books I read during the break is a memoir written by Vitale Buford. She writes of her intense addiction to the drug Adderall, and her road to recovery. She lives in Lexington, and we talked via Zoom. Her story doesn’t sugarcoat anything about her struggles, and now she’s helping others who need help.

In the news, it seemed for weeks there was nothing to report beyond COVID stats and the weather, but as things get back to normal politics are heating up. The most despicable act in recent memory was the hanging in effigy of Gov. Andy Beshear by crazed right-wing demonstrators, who assembled Memorial Day weekend for a gun-rights protest. Beshear showed bravery, challenging the politicians who created the volatile atmosphere, saying ‘You can’t fan the flame and then condemn the fire.”

As a result, one protestor has lost his job in Louisville at a car dealership, and a politician known to sympathize with the message is under tremendous pressure to resign. Embattled police chief Steve Conrad has finally resigned amid what has become a national controversy, after LMPD officers killed an innocent woman while conducting a no-knock warrant.

And our school system administrators want more of your money. After the JCPS school board voted to raise taxes, a movement has sprung up to fight it. Chris Thieneman, who successfully fought a proposed library tax in 2007, told me about it.

I generated some big personal news during the break — I’m now a Realtor for eXp Realty, working with Rick Robey. Here’s my new site for that — Rick.Redding@exprealty.com. I’m also pleased to tell you that my key sponsors, the Eye Care Institute and Heuser Health, are on board with the show.  So here’s to the start of another 349 episodes of the Rusty Satellite Show.