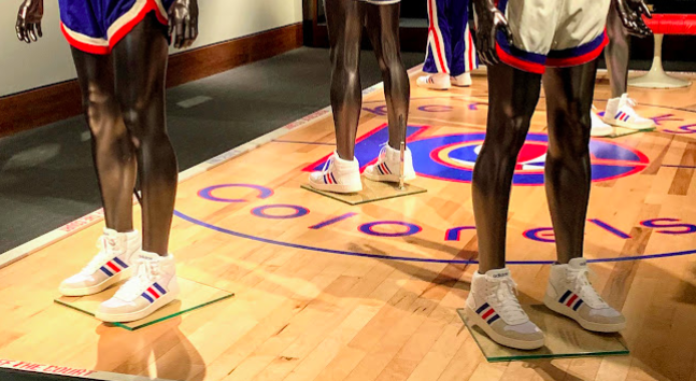 We’re in the home stretch. Despite the blanket of snow we experienced this week, the blanket of roses is being prepared and readied for the winner of the 147th Running of the Kentucky Derby. Of course, here at the Rusty Satellite Show, we’re ready for Mint Juleps and merriment.

So I went to where the action is — at Paristown, where Jeanne Hilt shared some great news and showed me around Hopewell, the new “world-class flex work and off-site meeting space.” I was impressed, but wanted to hear more about the Crashers concert Friday night, the Richard Sullivan art show and what time Hickory Vaught is playing bluegrass this weekend. Oh, and the music of Hot Brown Smackdown, another Rusty favorite. Jeanne says Paristown may be the place to be on Derby Day as well.

Later, I was the guest of Stephen Yates at the Frazier Museum, where the new Cool Kentucky exhibit features such items as Tori Murden’s boat, Paul Hornung’s Heisman and uniforms from the Kentucky Colonels. The tourism industry may have taken a big hit from COVID, but Yates explains how the Frazier is getting back to business, with the leadership of former Rusty guests Andy Treinen and Rachel Platt.

I’m predicting a lot of home parties this Derby, especially if you can only invite guests who’ve gotten their COVID vaccine. Those of you refusing to get the vaccine should just stay home. The highlight of my week was watching the final episode on Shameless on Showtime, ending an unbelievable 11-season run highlighting the shortcomings of the dysfunctional Gallaghers on the South Side of Chicago. No other cable scripted series, not The Wire, Breaking Bad, or Justified, lasted as long. And it was great until the end, as Frank finally died in a way that didn’t surprise anyone who has watched the show.

Here in Louisville, we’re ready for our big party and hoping everyone shows up. It promises to be an unusual Kentucky Derby, but certainly a lot better than 2020’s September race.

If you’re in the market for a new home, or just want to talk about real estate, give me a call at 502-439-6391, and check out my eXp Realty web site. And thanks to Home Cuisine, where you can get healthy meals for home, for sponsoring the show.