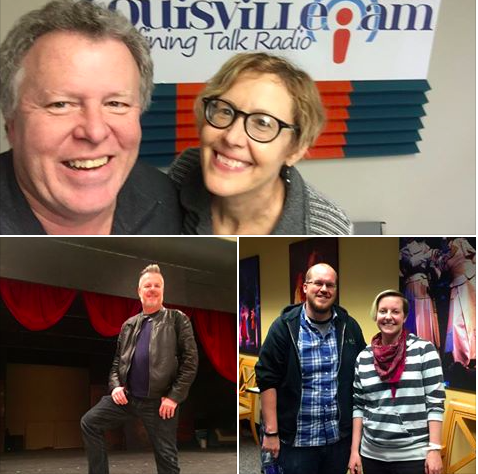 It’s a theater-themed Rusty Satellite Show, as I welcome in guests from Louisville’s art world. First up is John Leffert, now in his 17th year at director of programs at the Jewish Community Center’s CenterStage, where he’s preparing to raise the curtain on Funny Girl. Leffert has enjoyed an amazing career in the theater and overseen the growth of the program at JCC. The Tens is a group of seven 10-minute plays currently on stage at the Victor Jory Theater at Actors, and I talk with playwright Lexy Leuszler and director John Rooney about their contribution, Seep. Both hold positions on the Actors staff as well.

My guest co-host is Ann All, with whom I worked at a local online publishing company for several years back in the early 2000s. We got back together and once again enjoyed some rollicking conversation about a variety of issues, some of which is included in the show. The big event for me this week, especially in terms of social media interaction, was the 300 game my pal Mark Hebert rolled over at Ten Pin Lanes on Monday. Also, I saw The Tens at Actors and enjoyed a great meal at Citizen 7 in Norton Commons.

Among the topics we touched on are the newest entry into the local print publishing world, Tops Louisville, featuring several former Rusty Satellite Show guests. There’s more on the changes being made by Republicans in Frankfort and the upcoming legal battle an abortion bill is likely to bring forth. And we have opinions on the idea of putting metal detectors in schools, and an Old Louisville neighborhood voting itself wet. Join Ann and I as we discuss a great week in Louisville on the Rusty Satellite Show.