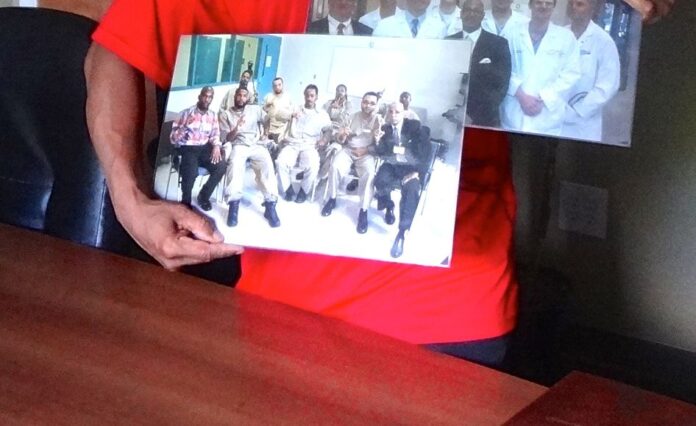 Rusty went a bit off the beaten path this week — visiting with Christopher 2X at 18th and Ali in West Louisville, then venturing over to New Albany to talk beer, blogging and politics with Roger Baylor.

If your only impression of 2X is seeing him standing up with victims of crime on TV, you are missing out on one of our city’s genuine and positive personalities. Yes, 2X spent time in prison, but when he got out he became determined to steer others on a more productive path in life. He’s become the go-to guy for the media on any issue involving race and the West End. He’s also working in the community to teach a non-violent way of life. He’s pictured here with some of the victims of gunshot wounds that he’s helping, and the team of surgeons from U of L who are working to stop gun violence.

Roger Baylor was advocating craft beer before it was such a craze, and he was blogging about important local issues when most people in New Albany didn’t know what a blog was. But now he’s made a name for himself challenging the status quo and politics of the city, and he’s running for Mayor. And still trying to convince people to steer clear of Bud Light.  I’m looking forward to watching the Mayor’s race over there.

Coincidence? I don’t know but the same week that I was writing a column about Colon Cancer Prevention Week for Insider Louisville, both 2X and Baylor told me about their recent experience getting a colonoscopy. In the news, a lottery winner gave $1.2 million to Actors Theatre. Summer is all about music, so we’re talking about a lot of it coming to town — including Todd Snider this week, Forecastle in July and this week the Louder Than Life organizers announced they’re coming back in October — with wrestling! It’s another big weekend for drinking beer outdoors, with the Casks for a Cause party and a soccer game at Slugger. And can anybody explain to me why I have so many lightning bugs in my yard? It’s all here on another Rusty Satellite Show.