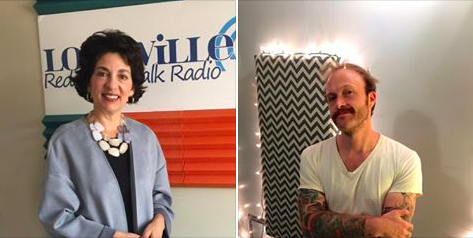 ‘Tis the season for football and festivals around here, and we’re fired up for a big one — the long-awaited Bourbon and Beyond down at Champions Park. There are talented chefs, experts in bourbon and of course a musical lineup of acts not seen around here since Forecastle.

Rusty is all in for seeing Jonny Lang and Trombone Shorty, but is fortunate enough to have persuaded Peggy Noe Stevens to come by the Louisville.am studios for a lesson in mixing bourbon and women. Stevens spent many years in high-profile corporate hospitality positions at Brown-Forman before going out on her own a decade ago. That decision was a rousing success, as today she counts distilleries as clients and operates the Bourbon Women Association.

Shadwick Wilde spends much of his time on the road, touring with his band Quiet Hollers, but is playing a rare local show in Old Louisville on Saturday. I talk with Shadwick after band practice about music, life and surviving. Quiet Hollers just released its third album, thanks to some support from SonaBlast Records.

I found some similarities in Wilde’s life to another fiercely independent and driven musician – Bruce Springsteen, whose biography I’m currently enthusiastically reading.

In the news, a planned athletic facility in West Louisville adds to the momentum already underway in the Russell neighborhood. And while the Louisville Cardinals failed in their big test against Clemson last week, they’ll be back at it at Papa John’s Cardinal Stadium on Saturday, while UK takes on Florida in Lexington.