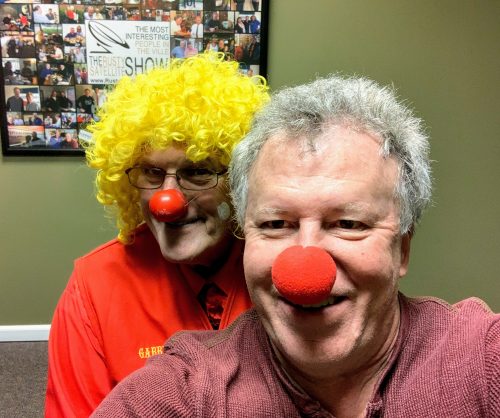 They don’t call him Gabby the Clown because he’s shy. In a Rusty Satellite Show first, I welcome a clown to town at the REMAX Propertie East studio — part of the 95th annual Kosair Shrine Circus. You can win free tickets from us – just write Rick@LouisvilleKY.com and let me know how many tickets you’d like and for which of the nine performances this weekend.

Gabby said he became a clown 20 years ago, but was inspired to do so because he had polio as a child and it was the Shriners who helped him overcome the disease. He’s one of more than three dozen clowns, ages up to 86, who will be making you laugh at the Circus.

Meanwhile, it’s time for the 22nd annual Jewish Film Festival, and as Susan Waterman and Marsha Bornstein tell me, the chosen films aren’t just for Jewish people. They’re showing Feb. 8-March 3 at five different venues. Check out the schedule here. Susan is one the selection committee, and Marsha has been directing the Festival since its start.

Speaking of movies, I let you know what I thought of Once Upon a Time in America, the Brad Pitt pic that’s up for several Oscars. And I couldn’t have been happier to learn that 79-year-old hero-of-mine Delbert McClinton won a Grammy this week – you can listen to a clip of his Tall, Dark and Handsome album on the show. Locally, the Metro Council deadline to run for office came and went, and I’ll be watching two former Rusty guests as they hope to win primaries in May.

Things are heating up in local real estate, and I tell you about Welcome Home funds available to first-time home buyers. As always, the city’s most interesting and longest-running podcast wouldn’t happen without the support of the Eye Care Institute and Heuser Health, along with the Sokoler Team at REMAX Properties East.