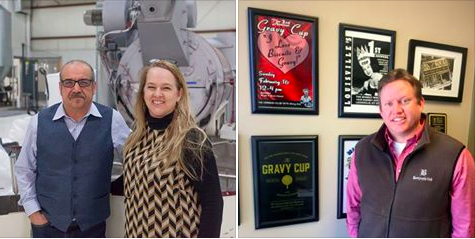 Download the Rusty Satellite Show this week to be in the know on some really interesting people making news in my hometown. First up is Mike and Medora Safai, who are the entrepreneurs behind Safai Coffee. But they’re also attempting to transform the Shelby Park neighborhood into one of the coolest spots in town. Their plans include a brewery, bakery, restaurant, Farmer’s Market and that’s only the beginning. Listen in to hear Mike Safai’s interesting immigration story, and how he owes part of the credit for getting to hear to the journalist Christiane Amanpour.

You can check out the story about the Safais at EatDrinkTalk.

And while your first reaction to the idea of a competition called the Gravy Cup is how unhealthy is sounds, rest assured that the city’s finest chefs are preparing special recipes for your enjoyment. I’m talking with Zach Fry, who got the bright idea of staging a competition for the southern staple during a trip to New Orleans. More on this at EatDrinkTalk.

I know some of you are getting political fatigue to the point that it’s hard to open your Facebook feed, I’m focusing on happier items in the news segment, such as the slew of great events coming up and how the Omni Hotel is going up, up, and up and transforming our skyline.